I have to say my first Denmark Festival of Voice was awesome! I only attended two days of the festival but everything I experienced was awesome. I think I took on a little too much because I’m still exhausted so I’ll have to pace myself better next year. I got to meet a lot of interesting people and amazing artists. It’s an experience I won’t soon forget.

Being part of the festival program meant that I got to see a lot of shows and attend some workshops. I was up early enough Saturday morning to discover ice on my car windscreen (first ice of the season) and brave the sunny 3˚C morning. All rugged up I made my way to The Hills are Alive with the Sound of Words workshop led by Perth based poet Kate Wilson. The photo to the left was the scene that greeted me. It’s hard not to enjoy yourself in such a beautiful setting and I enjoyed this workshop immensely. The workshop was a little out of my poetry comfort zone with the performance aspects but it generated some creativity in me and gave me some ideas.

Next on my agenda was to catch the first performance of Fables by Christina Cairns. Her show was quite the treat. She mixed story telling in with musical performances all themed around Irish and Scottish mythology. I haven’t studied these mythologies as closely as I have Greco-Roman, Middle Eastern and Egyptian myths but I found most of the tales she picked familiar. Musically she reminded me of Loreena McKennitt who is one of my favourite artists. It was a shame she didn’t have a CD for sale because I definitely would have bought one.

After Fables I headed over to the Yurt to prepare for my Indie Publishing talk (check out the picture to the left. They don’t show up as well on the photo but there are Nordic runes carved into the wood at the top of the ceiling). I won’t bore you with the details because I’ve discussed all the same material (in greater depth) already on this site. (Side note: if you are interested in my experiences as an Indie Publisher you can find my posts on the subject by finding the appropriate posts in my blog history). I’d never seen/been in a real Yurt before and it was really interesting. It got quite warm inside, despite it being such a cold day, and I’m still trying to figure out how they take it apart to store it. I stayed in the Yurt after my discussion and listened to Hossein Bouazar describe his experiences as an asylum seeker. His talk was quite interesting. I was surprised to discover the lack of charities that are willing to help asylum seekers once they are in Australia building a new life.

I stopped for a coffee at a wonderful café and caught a performance by Nellie G, a local performer that was rather enjoyable, before moving over to the Artshouse to listen to Kate Wilson perform some of her poetry. Kate was delightful. Her performance and writing style reminded me of Tim Minchin, especially his song/beat poem Mitsubishi Colt. My last stop for the night was the Festival club featuring the performances of Slap My Thighs And Call Me Barbara (surprisingly good, easy rock style), Ross Vegas and Csokolom Banda (Transylvanian and Gyspy music – according to the program). By the time we left at the end of the show it was 2.7˚C and I was freezing. 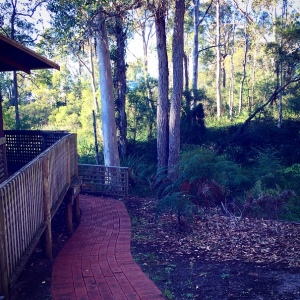 Sunday was another early morning with workshops by David Rawet, who made me wish I had stuck with my guitar lessons, and The Lelebirds Uke and Song, which kinda made me want to go out and buy a Ukulele. I took Sunday a lot slower than the Saturday. Saturday had taken a lot out of me and I was coming down with a cold (which is still settling in today ☹). I taught my Build-A-Beastie workshop which seemed to go over well and then I took myself home to bed.

All in all I had an amazing experience and I couldn’t say I had a single negative experience within the festival setting. I really hope I can be a part of it again next year and perhaps run a few more workshops. For now though I’m putting it all at the back of my mind to think about at a later date because I’m starting to feel a little delirious with my exhaustion and lack of oxygen due to my stuffed up nose. So I’m going to say goodnight and wrap myself up in my doona for some well deserved sleep. I look forward to touching base again next weekend. In the meantime feel free to leave me any questions you have about the festival by commenting below.

Indie Author. Lover of all things supernatural, witchy and magical. Obsessed fan of The Wizard of Oz, Supernatural, the works of Tolkien and the Harry Potter Universe. You can purchase my debut novel The Kingston Chronicles at Amazon. View more posts